Welcome to The Drawing Room! 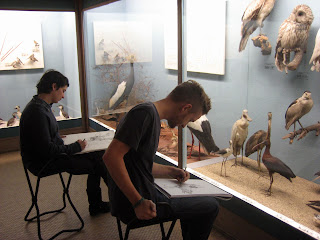 This class introduces basic techniques in drawing, with a focus on drawing from observation. Exercises explore technique, medium and strategies in visual thinking. The class is a perfect introduction for beginners, with something new even for the more experienced.

Each class is structured around a formal topic (contour lines, tonality, negative space...), with examples from art-history and a brief discussion. We will build technique through a series of guided exercises, followed by time for experimentation and longer drawings. We will draw from a live model and from still life creations.

We will make several excursions to draw out in the field, including the ready-made still lives of Berlin’s Natural History Museum, the statues in the Pergamon Museum, and a plein air site.

Schedule: Monday 6-9pm
- the field-trip will be scheduled at a different time
Spring Drawing Workshop is April 16 - June 4, 2012

Cost: 135 Euro for the complete Workshop (8 classes plus 1 field-trip)
- recommended for beginners
or 20 Euro per individual class 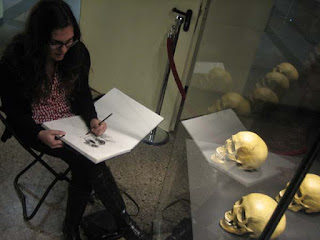 "Excellent for first-timers! Challenging for slightly more experienced!  Stimulating for experienced artists too. You've got nothing to loose. Mira's Life drawing class was our highlight of the past summer."


Berlin based artist Viktor Timofeev shares some of his drawing techniques in this interview for the Drawing Room.  Find tips for drawing in perspective, applied both observed and invented spaces!

5 Questions and 5 Drawings from Viktor Timofeev

1. Where are you from and how did you end up in Berlin?

I am from two places really - I was born and grew up in Riga, Latvia and then moved to New York and went to school there. I ended up in Berlin probably the same way most people who aren't from here get here, just wanted to see what it was like, then boom! years fly by. 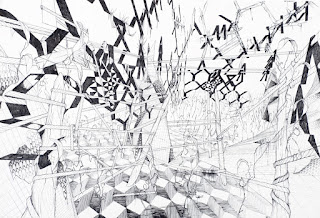 I drew a lot as a kid. I had my own comics strip called Patat, like the cone full of fried potatoes you know? I fell back into drawing as soon as I started university though, but actually it wasn't in drawing class; just in classes that were kind of boring. Then I took the initiative and built it up, so I guess I just learned how to draw from my own needs, based on what I wanted to. But I was also very much into figurative drawing, every weekend was spent at the Metropolitan museum drawing Roman statues, but I really liked messing them up, like cutting off the hands that weren't cut off, mutilating faces that kind of stuff. 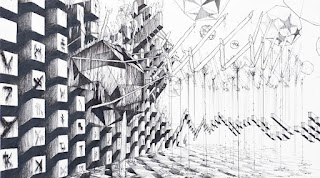 3. What attracted you initially to your architectural subject matter?

I think with architectural drawing there was something magical that just sparked for me. On the one hand, the parameters are so tight. But on the other, its totally a window into this other world - This world of perfection, where diagrams and physical reality are one and the same. I really liked that kind of framework, forcing a creative substance through this colander. It was specifically a few people's work.. Otto Wagner, Frank Lloyd Wright, and also Aldo Rossi. 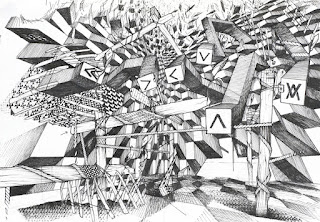 4. Is your imagery mostly invented from your imagination or observed from your surroundings? Or is it a combination?

It's completely made up at this point. I used to draw a lot of "nature" but that's done for now. Actually I recently tried to draw my hand and realized I am very rusty, need to sharpen that up. Anyway, in the past I looked at compositions from really carefully engineered images, like advertising, architecture renderings, and try to pick them apart, and then turn it around to fit my needs, but I've been doing that less lately. Now I just start with a single object or thing, and build out as I go, not front to back or back to front, all over at the same time. It becomes this game and it's really such a fun experience! 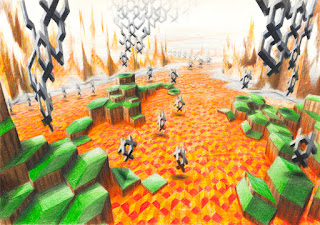 5. What tips would you give to someone learning how to draw in perspective?

The best thing to do is really observe it in space.  Don't just draw the telephone poles- stereotypes at home. Go out and look at how long streets recede, and then kind of just wrap your mind around things slowly. I think its important to discover it for yourself rather than read tutorials online or in class. But you have to have a strong interest to even get started. Start with a basic street (1 point perspective) , then make an intersection (2 point perspective), then practice regular grids in space, then triangular grids, and then move onto 3 point perspective, and then circular, etc. Hope that helps! 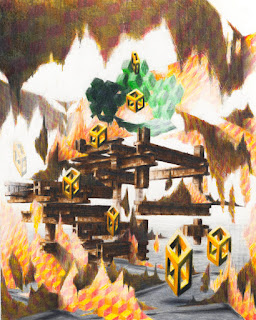 A couple of date changes!


The Drawing Room Open House is Sunday April 15, from 3-6pm.
RSVP on the Facebook event: here


The Spring Drawing Workshop starts Monday April 16, from 6-9pm.
Also note the new lower price when you sign up for all 8 classes, plus the field-trip!


Looking forward to the new class when I return to Berlin from my tour of the West Coast, USA!
best,
Mira


Posted by Mira Safura No comments: