This blog is retired, but we didn't want to erase all great content we had accumulated over the years, so we have left if here for you. We look forward to seeing you at our new and improved website. 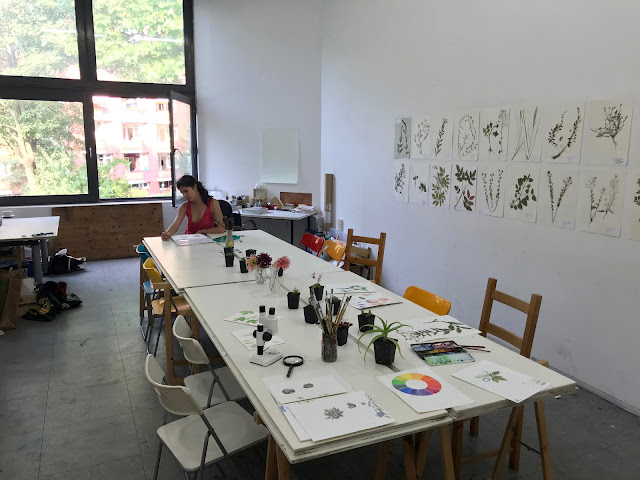 Katy Kirbach will be teaching Color:Theory and Practice at the Berlin Drawing Room starting September 10.

'My paintings aim to create a viewing experience that is simultaneously optical and physical. They are made of painted, hand-cut strips of canvas which are attached to the stretcher and then woven together. Constructing the surface in this way creates an interdependent relationship between the ‘structure’ of the support and the ‘ornamentation’ of the painting. It also slows the pace with which each painting reveals itself.

I am attracted to colors that appear to glow or to reflect light. Fluorescent colors are aggressive and speedy, while also being the least light-fast pigments, aging into softer versions of themselves. Silver can appear innocuously dull one moment and radiant the next, affected by light source and movement.

Several years ago, when I was first preparing to teach a Color Theory course at the School of the Art Institute of Chicago, I went through Josef Albers Interaction of Colorand made examples of each exercise outlined in his book. I wanted to make sure I fully understood all of the principles he was outlining, so that I could select the exercises I thought would be most useful to students. The exercises in the Interaction of Colorare rigorous; I had been working with color for many years, but Albers’ exercises challenged me, by asking me to look, and then look again. Many of his exercises are optical magic: discovering how to make one color look like two different colors, and then how to make two colors look like one; learning how certain colors, when placed side by side, will disappear into each other, while other colors will create powerful optical vibrations.

I found that the focus demanded in Albers’ exercises had a profoundly freeing effect on how I approached color in my own studio practice. Surprisingly, the rigor of the exercises allowed for a new level of playfulness in my paintings. I already had specific ways in which I was using color in my work, but the exercises gave me a deeper understanding of the mechanics of color, allowing me greater confidence in the studio. ' 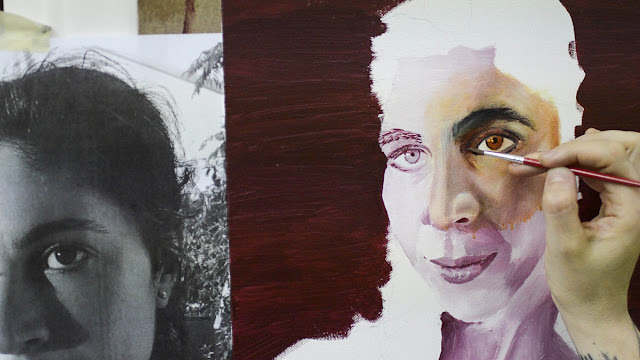 Portrait painting has such an antique history and development that it is impossible to look at the contemporary take on it without tracing back its origin.

The importance of representing the character of an individual with accuracy (often times the commitment themselves) while at the same time being kind about it is a tricky path.

Self portrait is an interesting way to observe how those specific details that we may perceive as flaws are also part of what defines our unique appearance and makes us, us.

In the age of selfies and easy photoshopping, rediscovering the art of recording ourselves and those around us in a more personal and internally processed way is an added bonus. Through drawing and art we can redefine our standards and perceptions, reconnecting with both traditional and more modern techniques will gives us new tools to understand human character and emotions.

Reflecting back on Drawing Water

Last summer accomplished multi media artist, drawing instructor and scuba diver Klara Hobza led the Drawing Water Workshop. Equal parts drawing workshop and immersive experience, the meditative nature of this class led to some stunning work made by the participants. This summer we are offering a second edition of this workshop. So if these images look inspiring to you, you can join us! Sign up on our website.


with Klara Hobza (artist, drawing instructor and expert scuba diver)
Immerse yourself in deep observation and self-expression through the process of drawing water in motion. Explore how observational drawing can lead to abstract imagery by focusing on the unique qualities of water such as movement, rhythm and texture.

After an introduction to water images spanning from Japanese masters to contemporary artists, we will exercise basic drawing techniques that help us depict water in movement and water as a reflective surface.

We will apply a mixed-media drawing approach, layering line drawing with liquid ink brush and charcoal. Out in the field we will practice both quick motion studies and multi layered long studies. The observational and immersive techniques acquired will prove valuable in the process of understanding the craft of making images. 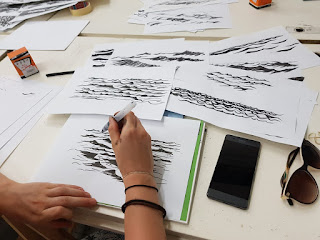 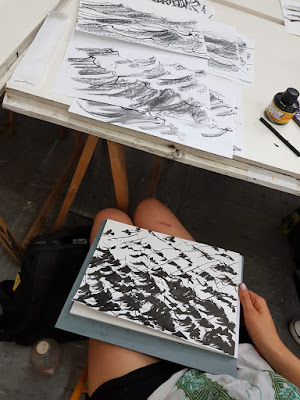 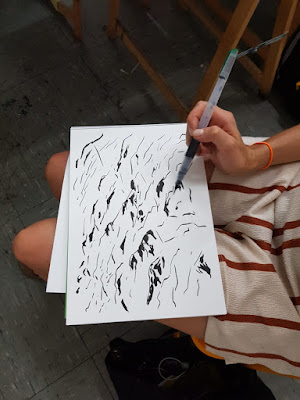 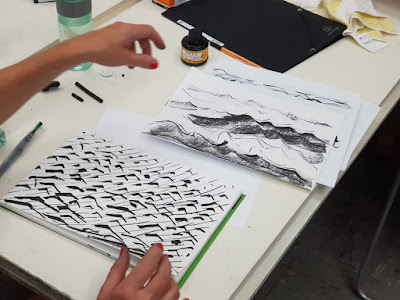 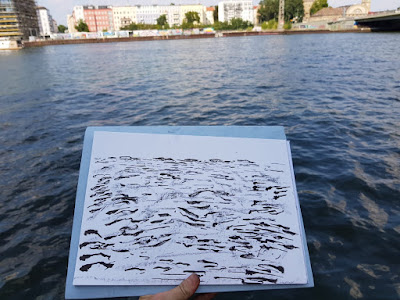 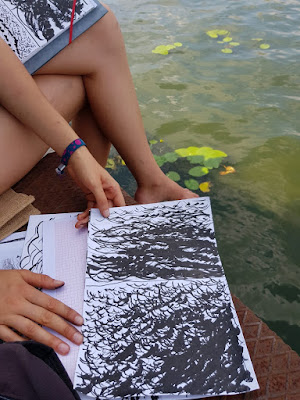 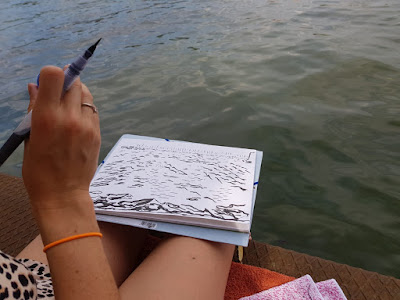 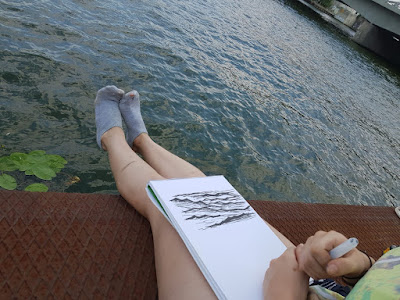 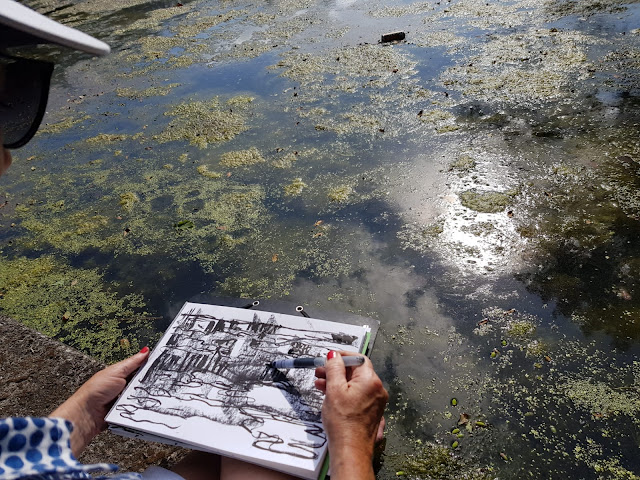 Drapery in Art History and in the Sketchbook


Flowing folds of fabric can be incredibly expressive, suggestive, or even uncanny, making drapery a crucial subject to master for artists throughout the centuries. The formal properties of drapery have been used to accentuate and guide compositions, even serving as emotional cues, within sculpture, drawing and painting. Being able to proper render drapery has also been a way for artists to put their technical mastery on display, a sign of just how tricky it can be. Or should we rather say, how tricky it can seem? While drawing drapery might seem like a daunting challenge, with Giulia guiding you through the process, it will unfold beautifully ;)


Giulia Caruso is an incredibly patient and experienced instructor, trained in Italian classical techniques for many years. Below she shares some remarks on her experience of drawing and teaching to draw drapery, along with some pages from her sketch book that she takes with her to museums. 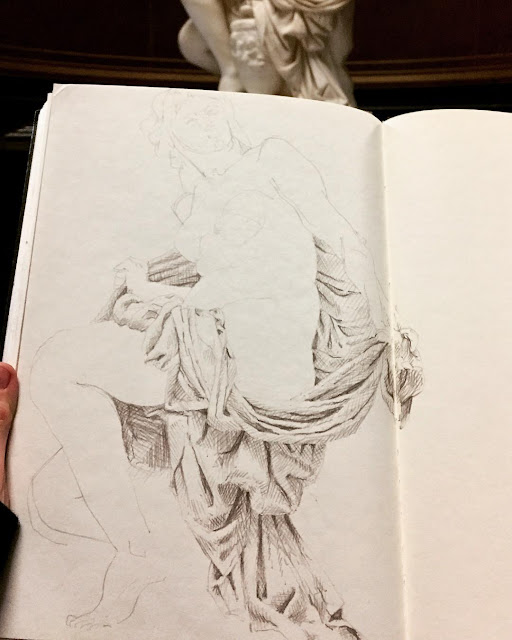 Drawing drapery is one of the things that most often makes my students moan and roll their eyes. It can be frustrating and discouraging how a simple piece of cloth can be so stubborn in its shadows and so hard to render with decent softness and volume.
But drapery can be the perfect starting point to learn how to master chiaroscuro and find confidence in other subjects. If you can make a dress feel alive, then everything else will follow. 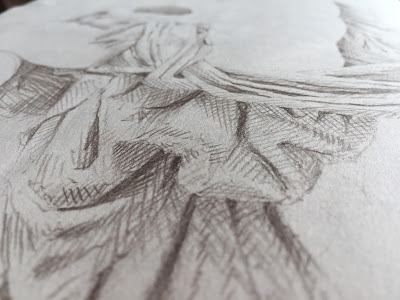 When I study at the museum I never shy away from drapery: neoclassical sculptures are especially magical in this, showing the extreme mastery involved in making marble look alive and in movement. And sitting there in front of it, focusing slowly on folds and shapes, can be a truly meditative experience. 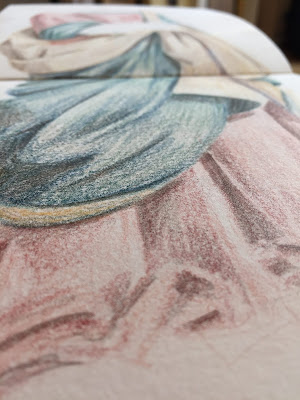 With every complexly lit subject, the secret is always in the process. The method. Trying to draw drapery without a plan can be overwhelming. It's hard to keep track of where you are and everything falls over itself, while you groan and curse the sculpture that made it so hard. But if you have a plan, it's like learning how to surf. You recognize waves and patterns, and once you are in the flow, it's not so hard anymore. 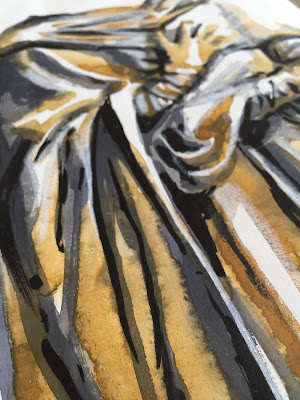 Clothing has always had a special role in classical art, embodying and conveying meanings that go further than what the eye can see. The whole symbolism hidden behind them is fascinating and it can be inspiring for character design and illustration. 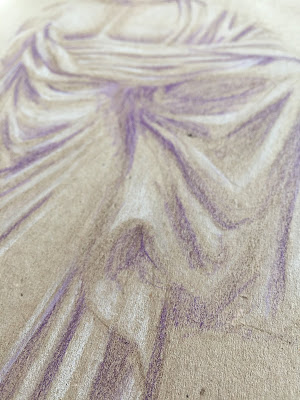 My goal as a teacher has always been to give people tools to express themselves and their vision, to guide them through a process of understanding and discovery of their own potential.

Most of the times it's not in the practical skills but in the mind structure: the way our visual education allows us to analyze and understand the structure of a subject, the logical process of planning how to approach it and trasform it on paper.

Once that foundation is there, the rest is only practice. Keep drawing, and quantity will bring quality. 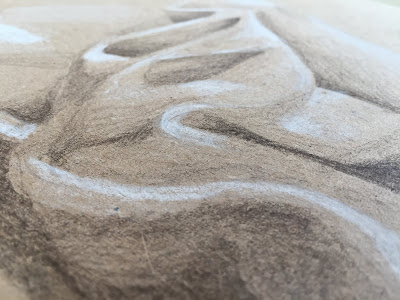 One of the biggest task required in drawing and painting is to correctly recognize and organize tonal values, and drapery is the perfect subject for that: once the need for perfect similarity is gone (because you can't really recognize one piece of cloth from another) what is left is only a symphony of tonal values, winding together to create fluid shapes.

Behind the Scenes at the Museum für Naturkunde Berlin

During the Wunderkammer Drawing Workshop we've been so lucky to meet some of the scientists that work at the Natural History Museum and not only hear about their research but gain access to the research collections and draw from their specimens. It has been a very unique experience, from giant bird spiders to glittering crystals.

It has been fascinating to learn how different disciplines within the natural sciences record and document their specimens. There are varying traditions according to the scientific branch, responding to the unique characteristics of their subject matter.

For example, fossils are documented using composite high resolution photographs made even more detailed by coating the specimens in a fine white powder.

Crustaceans and spiders are still drawn with paper and pencil, using a camera lucida attached to a microscope. More recently, Dr. Coleman at the museum has developed new techniques using computer vector drawing.

Minerals, on the other hand, are described using mathematical equations fed into a 3D modeling program where specimens are approximated using different measurements of proportions and angles.

The first module of our workshop held in collaboration with the Museum für Naturkunde Berlin has come to a finish, however we have a second module focused on watercolor starting soon!  Join us in our exploration of the museum collections, inspired by the figure of the Naturalist. 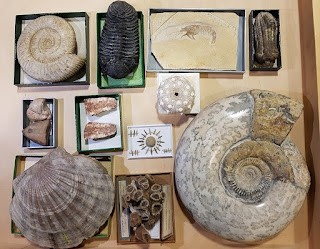 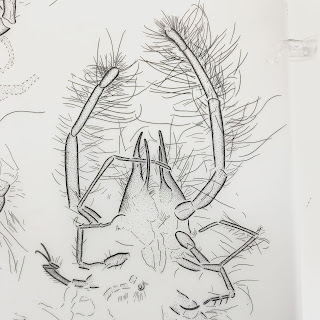 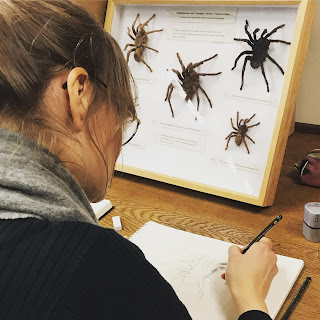 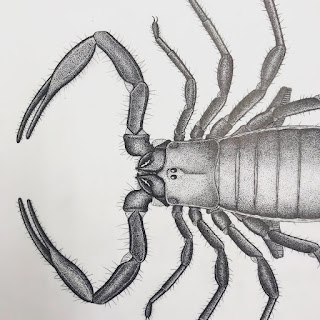 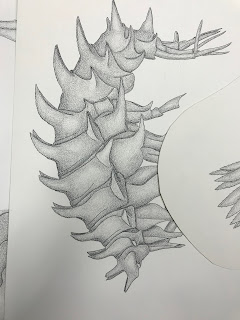 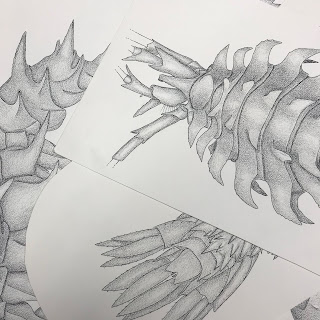 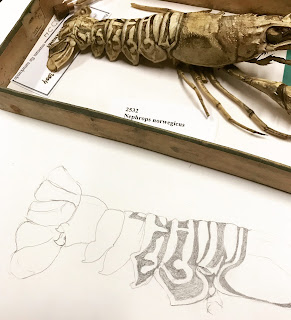 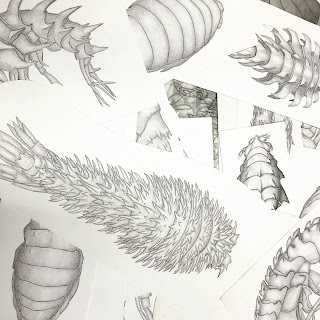 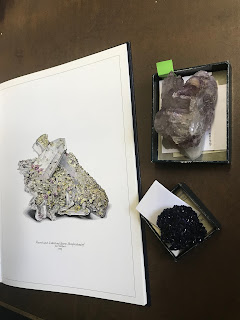 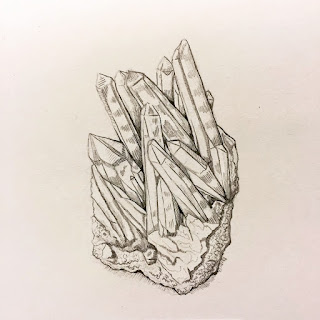