John Singer Sargent (1856-1925) made hundreds of rapidly drawn charcoal sketches of society personalities, drawings he referred to as "mugs." He made these in response to a high demand for his work. Not being able to satisfy all with oil paintings, he satiated his sitters with quick charcoal drawings.

These portraits are mostly of wealthy patrons, although sometimes he would make exceptions. But that is already a much wider pool to draw from than his biggest influence and predecessor Velázquez, who only painted royal subjects.

These "mugs," like a facebook profile picture, should be seen in a social context just as much as an art history context. Sargent not only captured a likeness of the sitter, but created a portrait of a social milieu, the decadent Edwardian high society.

I wish I could know more about some of the individuals in these drawings, and what was going on around them at the moment these drawings were made. For example, the striking portrait Vaslav Nijinsky in costume for the ballet 'Le Pavillon D'Armide' at the Ballet Russes. Nijinsky has an incredibly heartbreaking life story, despite his major talent. Read about him at this link. http://en.wikipedia.org/wiki/Vaslav_Nijinsky

Here is a link to some wonderful biographical information and details of Eleonora's sitting with Sargent. In this case, Sargent requested her to to sit for a drawing because of her extraordinary personality.  http://kihm2.wordpress.com/2007/10/23/sears-by-sargent/ 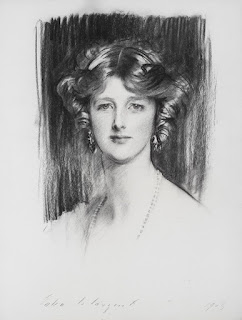 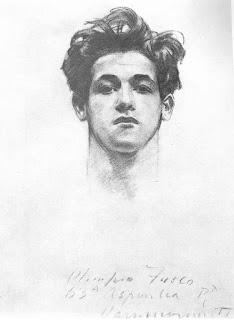 One portrait we do have a sensational back story on is the infamous Madame X. Virginie Amélie Avegno Gautreau, did not commission this portrait. She was pursued by Sargent who wanted to create a masterpiece for the 1884 Paris Salon.

"The model was an American expatriate who married a French banker, and became notorious in Parisian high society for her beauty and rumored infidelities. She wore lavender powder and prided herself on her appearance." (Wikipedia)

Once unveiled, the portrait was met with critical hatred. Gautreau, without lending her name to the piece, was unmistakable with her strong features. The criticism was a combination of revulsion at the painting and revulsion at the perceived vulgarity of the subject. A woman who would sensationalize herself for social promotion, or so it seemed. Gautreau was disappointed and humiliated that the masterpiece she believed herself to be contributing to was such a critical disaster, and that not only the painting but her character were being criticized. Sargent tried to make amends by repainting the shoulder strap of her dress in an upright position, it was originally off the shoulder. This painting can currently be viewed at the Metropolitan Museum in New York and is now considered widely to be his greatest achievement!


And I just had to share this image of the dancer Vaslav Nijinsky!